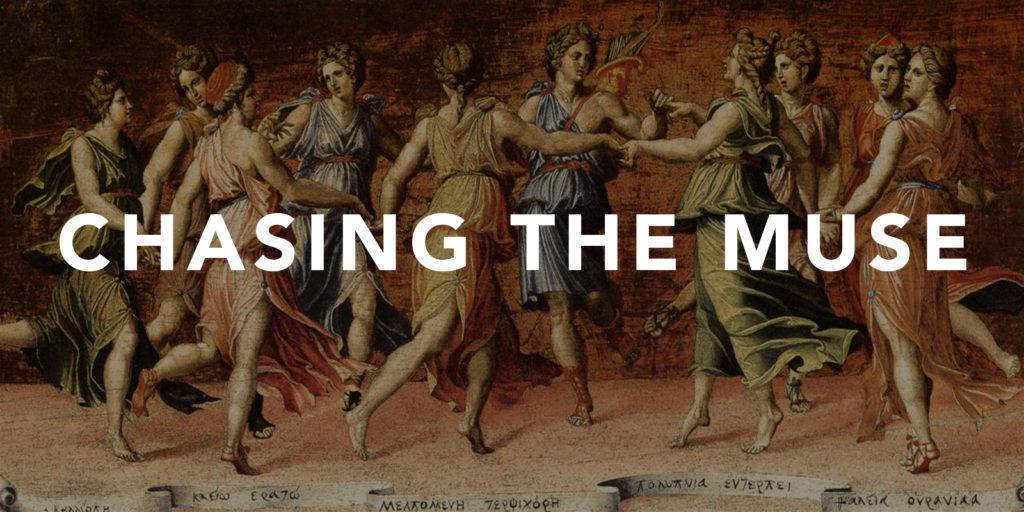 I am sitting writing this with the sound of waves splashing nearby and a slightly low bass sound humming away, like as though far away some heavy freight train is moving along tracks leaving a sonic vibration.

I’m not by the sea though, I’m sitting in my garden in the early evening, on what has been a very hot day for the north of England. The sound in my ears is actually an audio track that I’m listening to, to help me concentrate and be more creative.

So where should we start?

We’ll start at the very beginning. I want to go back, back in time. Back to an age of myth and legend, the times of the ancient Greeks 2600 years ago.

Mount Olympus is where we find the nine daughters of Zeus. These goddesses were also the daughters of Mnemosyne, who was ‘Memory personified’ in Greek legend.

These nine goddesses were called Muses, and they were the embodiment of the arts. Calliope who was Poetry, Clio who was History, Euterpe who was Music and Lyric Poetry, Thalia who was Comedy, Melpomene who was Tragedy, Terpsichore was Dance, Erato was Love Poetry, Polyhymnia Hymns and Urania was Astronomy.

Their legends and stories differ with attributes and names changing depending on the storyteller. However, the nine Muses are blessed not only with wonderful artistic talents, but also with great beauty, grace and allure. Their gifts of song, dance and joy made the gods and mankind forget their troubles, which was thought to be as an antidote to their mother, Memory.

They inspired musicians and writers to reach ever greater artistic and intellectual heights.

Today the myths and legends are gone, but like many ancient things, their memory lives on in our language.

We play Mus-ic and we visit Muse-ums (a public display of knowledge), one may have Muse-d what they would say about us, and sometimes we are a-Muse-d by comedy (remember Thalia).

With that brief lesson in history, we’ll switch back to present day where I sit with the sound of waves lapping in my ears.

The humming bass sound is a gamma wave, which is around 40hz and it’s supposed to help sync my brain to that frequency. I can see these two concepts are not obvious companions, ancient Greek goddesses and gamma waves appear to be disparate connections.

Gamma waves, as a frequency in my thought patterns, are related to “simultaneous processing of information from different parts of my brain”, and they are associated with “higher states of conscious perception”. Ergo, me being more creative. So what was once seen as a gift from Mount Olympus, is now an app in my pocket that lets me access higher creativity.

Back in the legendary day…

Hesiod spoke with the Muses on Mt. Helicon and they breathed into him their divine voice, so that he could proclaim the glory of the gods and their descendants. Hesiod, the shepherd, was transformed into one of the most important poets in Greek history, even western history.

However in this day and age you and I don’t need to travel to Mt Helicon. We can drink a cup of coffee and stick some headphones on and within a few moments be in “flow” ready to pour forth our creativity.

What we call “Flow States” are moments when time ceases to exist, where you forget everything other than the task you are fixed on. “Flow” or “being in the zone” is synonymous with action sports like skydiving or surfing etc.

But they are the same mental states as those found in creative process – moments when we catch ourselves writing or playing an instrument for hours on end.

Though these apps can help you get closer to that moment of peak creativity, there isn’t an exact formula that activates the muse-like mind.

There’s a lot of interest in this field and many people doing research on the “flow” experience like the Flow Genome Project, Red Bull and the US Navy Seals.

Each group trying to reach the peak of their own abilities.

And creatives and artists are no different, our chase is not the perfect dive, wave, ride or infiltration, ours is seeking the perfect song, lyric, sentence or brush stroke.

When we get lost in our craft, our process, when time speeds up or appears not to exist, we create things that sometimes appear to transcend us.

This unworldly feeling that sometimes produces our art is probably why the Greeks and other cultures believed that creativity “visited us”. That the fleeting nature of those moments had the transcendent feel.

You can force yourself to sit and write, draw, paint or craft, but it often doesn’t produce anything of real value to us. However there are moments in every creative’s life, when something very unfamiliar inspires our thoughts, lyrics and images. As though the Muse descends on us and reveals it.

It can feel like a totally different person doing the work for you, through you. This is why I think the story of the nine Muses, as the epitome of the arts in “winged form”, appears in Greek mythology.

Many artists, writers, singers and dancers talk about their Muse. Often as though the Muse was separate from themselves.

I love the fact that J K Rowling tweeted “Sometimes, after yet another 3.30am waking, you start to wish your muse could show up politely at 9am rather than waking you up to party.” That feeling comes from somewhere, so what is it?

So why does it feel a little like someone else, when we hit that sweet spot of creativity? Is it just a rationalisation?

A thought process to comprehend the surge of creativity in our mind? I’m all questions and not very many answers. However, there could be a reason in they way we think, or in fact in the way our brain works.

We have this big grey biological computer inside our skull, which gathers up data, all day long. Because of the mass of data it collects, it has to filter it on entry into our conscious and subconscious mind.

So when we have moments where our brain is functioning in the Gamma waves frequencies of approximately 30hz we enter ‘higher states of conscious perception’ so we can access different parts of the brain simultaneously.

And some of that, seemingly hidden, data is accessible. Sentences from conversations we once heard, or a melody we half heard whispered in our ears while out walking are recalled for the song we’re crafting.

This is why it often has that sensation that something other than ‘us’ is creating our ‘art’.

I would cautiously add that I also think the spiritual and mystic works in a similar way, that much of what appears divine or a word from god is purely subconscious data being released to the conscious mind.

So can something or someone, help us get to that place where we create divine works or creativity?

The place the Greeks believed, was nine goddesses bestowing gifts on us. Yes we can. If we can train our brain to access those “higher states of conscious perception” we can become more creative.

Throughout the ages, artists have chased their creative Muse through all sorts of means, through drugs, sex, drink, meditation, solitary confinement, isolation tanks and numerous other means. Some of these are acceptable and practical and some not, especially at work.

Using things like binaural beats we can reach deep into our grey matter and find things that are unique, bizarre, magical, inspiring, thoughtful and most of all creative.

It is not that these external rituals, processes or apps make us more creative. No, they just act as a gateway to a moment of creativity. They are an enhancer to what we already are.

Creativity is part of our makeup, the raw materials have been collected, and now all we need to do is assemble those lyrics, melodies and prose.