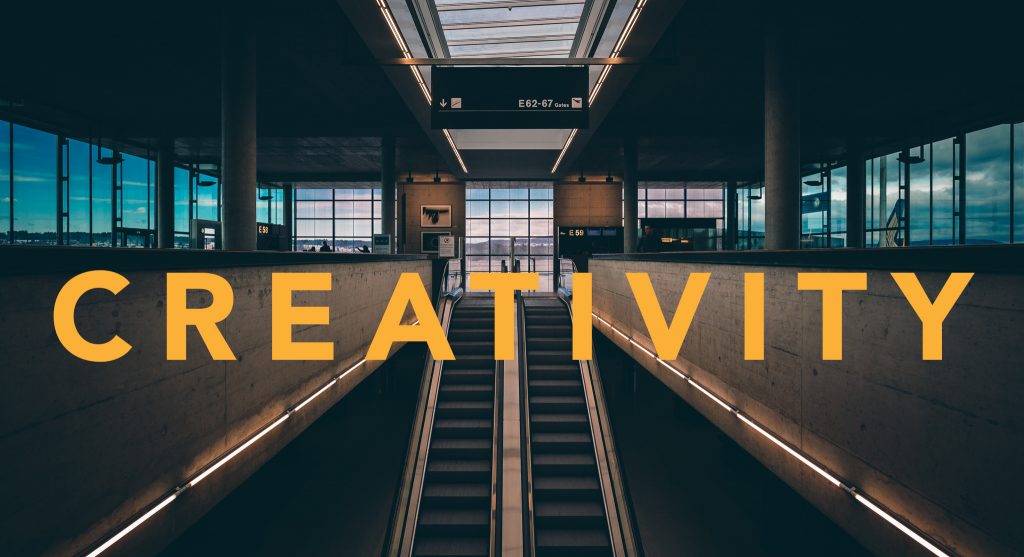 It’s early in the morning in the UK and I’m up with my 3-year-old alarm clock, who happens to be one of my two greatest acts of creation (you could say procreation, but this post is not about sex, nor about being a father).

This post is about the essence of being creative…whatever that actually means.

There are 7.35 billion people in the world, each of whom have a brain that lets each and every one of us be creative, from the child playing with sticks in rural Europe, to the piano student in Japan, or the chef in a hot and busy diner in Florida.

Each of us has creative ability, without exception. It is the creative process that has allowed human beings to be the most successful mammal on this planet. So if we’re all creative, why have I heard this statement so many times before: “It’s okay for you, but I don’t have a creative bone in my body”?

Well the metaphorical ‘creative bone’ is in fact more like a ‘creative muscle’. Unlike bones, muscles can grow through use, or conversely, atrophy if you don’t exercise them.

However, as much as I enjoy that metaphor, the reality is that maybe it’s the common understanding of what being ‘creative’ means that has led us to believe that some have it and some don’t.

It’s true that being a ‘Creative’ is a title usually attributed to designers, copywriters, photographers, playwrights and musicians. Most of those roles are in the ‘creative’ fields or Arts. However, creativity is the essence of those roles, not the function of them. That essence is also found in engineers, mathematicians, scientists and middle managers… okay so middle managers might take a little more of a leap of faith to believe, but it’s true, and I’ll explain why.

Creativity is not about what you ‘do’ with your brain, it’s how you use your brain.

To try and understand a little better, let’s swap the term, ‘creativity’ for ‘problem-solving’. In light of that simple change, everyone is now creative. Designers solve the problem of making the page readable, useful and attractive to communicate its message to you through text, pictures and white space. This kind of problem-solving may not appear to be as crucial as engineers solving carbon extraction from the atmosphere, but it’s no less a use of the creative problem-solving mind.

As for our middle manager, well they have to use problem-solving all the time. How they motivate people to perform? Is it through active meetings or berating them in front of their peers? They have to distill the right information into the monthly board meeting and evaluate how best to move up the career ladder.

All of these things require problem-solving through taking a given chunk of data and finding the best possible outcome.

When I started the third job of my career, I went in as a graphic designer to a business which was very broad in their creative output. Some agencies stick to print or web and those specialisms have a place, but the agency I was at had graphic designers, 3D designers, product designers and architectural designers.

So after a mind-expanding four years in that job, I realised that graphic design was only one part of design. In that time I had gone from being a heavily print-based designer, to working on software interfaces, visitor attractions, big brands, exhibition stands, building visitor flows, product design and interactive retail areas. I could see that once you allow the creative thought process to flow, all you needed to do was add the parameters of the brief and start the brain thinking – but all my brain was doing was problem-solving.

As a team we would often talk through the project or problem, proposing ideas, then a team member might constructively poke holes in the new proposition. This would then drive us to another idea taking that new information into account. This process could go on for a couple of hours until we had secured a solution. The solution at this point would still be very much an ethereal thing, based solely in our minds, but as we would go back to our computers and our specialities (2D and 3D), the idea would take shape and become our presentation to the client.

I often see this process in the same way I see a sculptor working, cutting away the wood or clay to reveal the beautiful sculpture inside, each idea and counter-idea is a slice taken off the clay until it reaches its final form.

I use the above as an illustration, but the process happens in many areas not obviously known for their creativity. For example, the small restaurant owner has to create a menu that will attract customers. He has to choose a decor that creates the right atmosphere for his style of food. He then has to fine-tune the menu once customers are coming in, noticing what sells and what doesn’t. He may then need to adapt how food arrives at the table – maybe he has put one too many tables in, which restricts service staff going in and out the kitchen. Or worse, maybe the restaurant feels cramped – people need space, so this could have a long-term negative effect on repeat custom.

None of this is seen as ‘creative’ and in fact the owner probably outsourced the so-called ‘creative’ process to a designer to have his signage, promotional literature and table menus done. However all the above issues require the power of a creative brain, a problem-solving mind.

Let’s look at it like this… a long time ago, in a galaxy far far away, there is an alternative multi-verse earth much like ours… If humans on that tiny identical earth didn’t have the problem-solving abilities we have, how far do you think they would get? They may have got to fire purely by accident, but I very much doubt they would have got to tools and the wheel, which means there would be no agriculture. And I’m pretty certain we would all be eating ‘grunt’… pardon? There would be no language either.

Communication would be a huge barrier they would not be able to solve. Fortunately we were blessed with a problem-solving ability that helped us build shelter, grow food and communicate with each other. Communication enabled us to build even bigger shelters and grow more food and create all sorts of technical and amazing things.

To sum it up, creativity is not the preserve of a few, it is the essence of being human.

We are all creators, problem-solvers and thinkers. Much like in the gym, some people have bigger muscles than others, some people’s muscles are not as obvious, but they are just as strong. There’s always room in this gym to train and help build your creative muscles…the more you use it, the more it grows.

So I challenge you to recalibrate your understanding of creativity and see yourself in the same light as some of the masters – Isambard Kingdom Brunel, Beethoven, da Vinci and Einstein. They are your peers. They may have more obvious creative muscles than you, but if you put the effort in you could easily surpass your own expectations.